Holden: The Rise And Fall

What caused Holden to fail after 164 years of legendary car creations?

Was it the mismanagement of General Motors?

A change in the average Aussie appetite for cars?

What forced Holden to drive off a cliff?

At their peak, nearly 1 out of every 3 cars on Australian roads were built by holden. Cars like the Commodore, Morano and Torana were built down under in droves.

But for the first 50 years of J.A. Holden & Co’s life, the name they were originally called. Was spent manufacturing saddles after James Alexander Holden emigrated from Wales to South Australia.

Yes, saddles that go on horses.

Half a decade later, In the midst of World One, J.A. Holden & Co began attaching bodies to vehicle chassis.

The Australian government had limited cargo on ships to only essential goods because German U-boats sank 50% of all ships during World War 1.

The shift from saddlery to vehicle bodies was swift, as 1924 rolled around Holden was producing over 22,000 car bodies a year and became GM’s exclusive car builder.

A few years down the line in 1928 the Holden emblem we all know and love today was revealed. Rayner Hoff created the iconic Lion & Stone symbol as an allusion to the old fable where prehistoric lions’ rolling stones led to the invention of the wheel.

And whoever created that fable was inhaling car fumes because I’ve never seen a lion do anything but sleep and hunt.

Holden’s success was not to last though as The Great Depression reared its ugly head. The Birth of Holden

Before The Great Depression, Holden produced over 34,000 vehicle bodies a year.

That fell over 20 times to 1,651 vehicle bodies a year later and Holden was left hanging on by tooth and claw.

But Holden had a guardian angel watching over them. General Motors. And while thousands of other businesses fell to the wayside, General Motors swooped in and saved Holden from certain collapse.

GM didn’t want to lose their sole vehicle body producer down under and they hoped Holden could capture the look and feel of the average Aussie battler and use that to sell more cars.

The Rise of Holden

Fast Forward 6 years to 1937 and Holden was building over 32,000 vehicles per year. Claiming a massive 40% of the Aussie market and posting profits exceeding $1 million pounds.

That’s over $130 million dollary doos in 2021. Rumours then sparked off about the first Aussie car and swelled for years until Prime Minister Ben Chifley announced the first Australian car, the 48-215 in 1948.

More commonly known as the Holden FX or just Holden. It’s a beautiful car that catapulted Holden into 50 years of dominance and unlike European cars, the Holden FX was built tough for Australian roads.

Holden understood what the average Aussie wanted in a car and the first ever Holden sold like wildfire. Total sales for the FX hit over 120,000 and reached the number one position for passenger car sales in 1950.

Holden extended their dominance with more iconic cars like the Torana, Morano and eventually the commodore. And when the Morano was first released in 1968 that also netted them their first Bathurst 1,000 win.

Holden winning the Bathurst 1000 for the first time, spawned the idea of winning on Sunday and selling vastly more cars at the dealership on Monday.

Or just winning on Sunday and selling more on Monday. How to Slay a Lion

So what or who was the big game hunter that slew Holden?

Rewind the clock to the early 1990s and Holden was shifting from strength to strength with a nearly 30% total market share dominance.

And in 2003 Holden’s last legendary chairman, Peter Hanenberger, said “We have the right people in place and we are financially very sound”.

This is off the back of a $265.6 million profit with more than 88,000 commodores sold that year. The commodore being the iconic modern Holden vehicle that encapsulated the spirit of the average Aussie dating back to 1978 when it was first released.

You can understand why Peter was confident. So what happened?

That widely independent chairman, Peter Hanenberger, who guided Holden to success after success, retired. General Motors saw that as an opportunity to tighten their leash on Holden. And use Holden not only to sell to the Australian & New Zealand markets, but the entire Asian region.

That came with its own set of problems as Holden had to shelve a lot of their Australian identity and become more mainstream to compete with brands like Hyundai and Kia.

New leadership also saw the rising cost of living and cheaper competition over the horizon and instead of carving out a unique niche of Aussie beauts, they cut costs and in turn quality of Australia’s iconic brand to compete on the world stage.

They wanted to stay a mass-market brand and by 2010, Holden had released a hodgepodge of cheap cars such as the Barina, Astra, Captiva, Epica and Cruze among others.

Which of these cars, if any, show that they’re Aussie? Would you even remember owning one?

Compared to the Commodore, the Torana or the Morano and these cars pale in comparison. They couldn’t compete with Hyundai or Kia on price either but Holden kept releasing lemons to claw back their market share.

And every cheap car that Holden released did damage to their reputation of quality cars like the Commodore SS V. 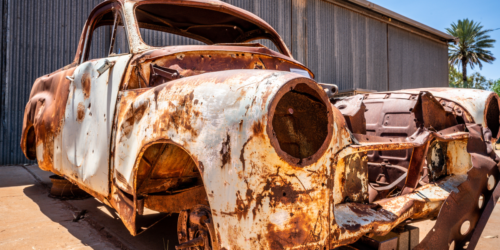 In essence, Holden cut costs to gain customers but inadvertently cut quality, losing those very same customers the next time they purchased.

And then what remained of Holden’s heart was ripped out of their cars in 2017 by exporting their manufacturing outside of Australia.

Further cutting the cost of Holden cars but again losing one of the main reasons Australians bought Holden, because they’re Australian.

And now Holden has officially closed down 3 years after pulling out of Australia.

So what would you have done if you were at the head of GM, an entire ocean away looking down on Holden?

And if you have a Holden, a ford, even a motorcycle, caravan or any other car, click the link below to check out Solid GPS trackers.

So you can recover your vehicle if it’s ever stolen at solidgps.com/plans/.